Bacillus cereus, Bacillus anthracis, Bacillus mycoides, Bacillus pseudomycoides, Bacillus thuringiensis, and Bacillus weihenstephanensis are six Bacillus species that have been identified as agents of foodborne illness (Ankolekar et al., 2009). B. cereus is a gram positive, spore-forming, and facultative anaerobic bacterium found in soil, contaminated irrigation water, fresh raw vegetables, and cooked rice (Organji et al., 2015). Infection due to B. cereus may result in diarrheal and emetic syndromes, depending on the degree of expression of the enterotoxin gene (Li et al., 2016). B. thuringiensis is a spore-forming bacterium and is closely related to B. cereus. Unlike B. cereus, B. thuringiensis has parasporal crystal bodies that are encoded by the cry genes (Vilas-Bôas et al., 2007).

Worldwide outbreaks of foodborne illness due to B. cereus have been associated with the consumption of raw produce, including beans, cress, and mustard bean sprouts (Burnett and Beuchat, 2001). In particular, perishable agricultural products subject to short time frames for distribution and consumption can be contaminated with pathogenic Bacillus species, resulting in potential foodborne illness for consumers. Although outbreaks in the United States are considered underreported, approximately 1% of bacterial outbreaks in the United States in 2015 were confirmed to be caused by Bacillus (CDC, 2017). In Korea, outbreaks caused by B. cereus accounted for 2.1% of all food poisoning cases in 2017 (MFDS, 2018).

Conventional methods such as selective media culturing and polymerase chain reaction (PCR) are used to detect bacterial contamination in food. However, these methods are time-consuming and labor intensive. It is difficult to distinguish B. thuringiensis from B. cereus by using PCR because substances in the sample matrix often inhibit the PCR reaction, and the tests are sensitive to experimental conditions (Pahlow et al., 2015). Therefore, a rapid and reproducible method for detecting and distinguishing B. cereus and B. thuringiensis is necessary.

Raman spectroscopy provides structural information by detecting molecular vibrations caused by the inelastic scattering of laser light interacting with the sample. Raman shift coincides with the vibrational energies of the molecule. Vibrational spectroscopy can provide rapid and accurate results along with surface-enhanced Raman spectroscopy (SERS) technology, which enhances Raman scattering by approximately 103–106 folds, despite being an early step in bacterial identification (Sundaram et al., 2013). SERS substrates are utilized as either metallic nanoparticles or metallic surfaces in colloidal solutions (Schmidt et al., 2012). To achieve high sensitivity and low fluorescence interference, nanoparticles and substrates are generally used to detect species of bacteria (Kahraman et al., 2008; Premasiri et al., 2016). Nanoparticles are used as both antibacterial agents and SERS enhancers (Mosier-Boss, 2017), and gold and silver nanoparticles are applied as SERS enhancers to detect bacteria E. coli, Salmonella typhimurium, and Staphylococcus aureus (Zhang et al., 2015; Yang et al., 2016a). However, only a few nanoparticle methods to detect B. cereus and B. thuringiensis have been reported. This study developed an easy-to-use, practical SERS method that was evaluated using five types of nanoparticles in colloidal solution to detect B. cereus and B. thuringiensis.

Colonies of B. cereus (Bc, ATCC 13061) and B. thuringiensis (Bt, USDA 708) were grown in Nutrient Agar (BBLTM, BD, Franklin Lakes, NJ, USA) at 37°C for 24 h. Bacteria were collected using a sterile loop (1 μL) and then suspended in 3 mL of phosphate buffered saline (PBS, 1X). The McFarland turbidity was measured using a densitometer (DEN-1B, Grant Instruments, Cambridge, UK).

The suspended McFarland turbidity of both Bc and Bt was 3.5 that is equivalent to 1.1 × 109 colony forming units (CFU)/mL. Raman spectra for each Bc and Bt suspension without nanoparticles (bacteria control), for each of the five nanoparticle suspensions without bacteria (SERS enhancer), and for each pairwise mixture of bacterial suspension and nanoparticles (SERS bacteria) were obtained and analyzed. Figure 2 shows the stepwise process to obtain the SERS spectrum of Bt with gold nanoparticle A. After obtaining four spectra of each sample, the mean Raman spectrum and then the fluorescence- corrected Raman spectrum were calculated sequentially. The normalized spectra of bacteria control, SERS enhancer, and SERS bacteria could then be compared to determine if any SERS effect occurred for Bt and Bc in combination with the nanoparticle. Figure 2 shows that the highest intensity peak of the normalized SERS spectrum of Bt with nanoparticle A is at 877.7 cm-1. 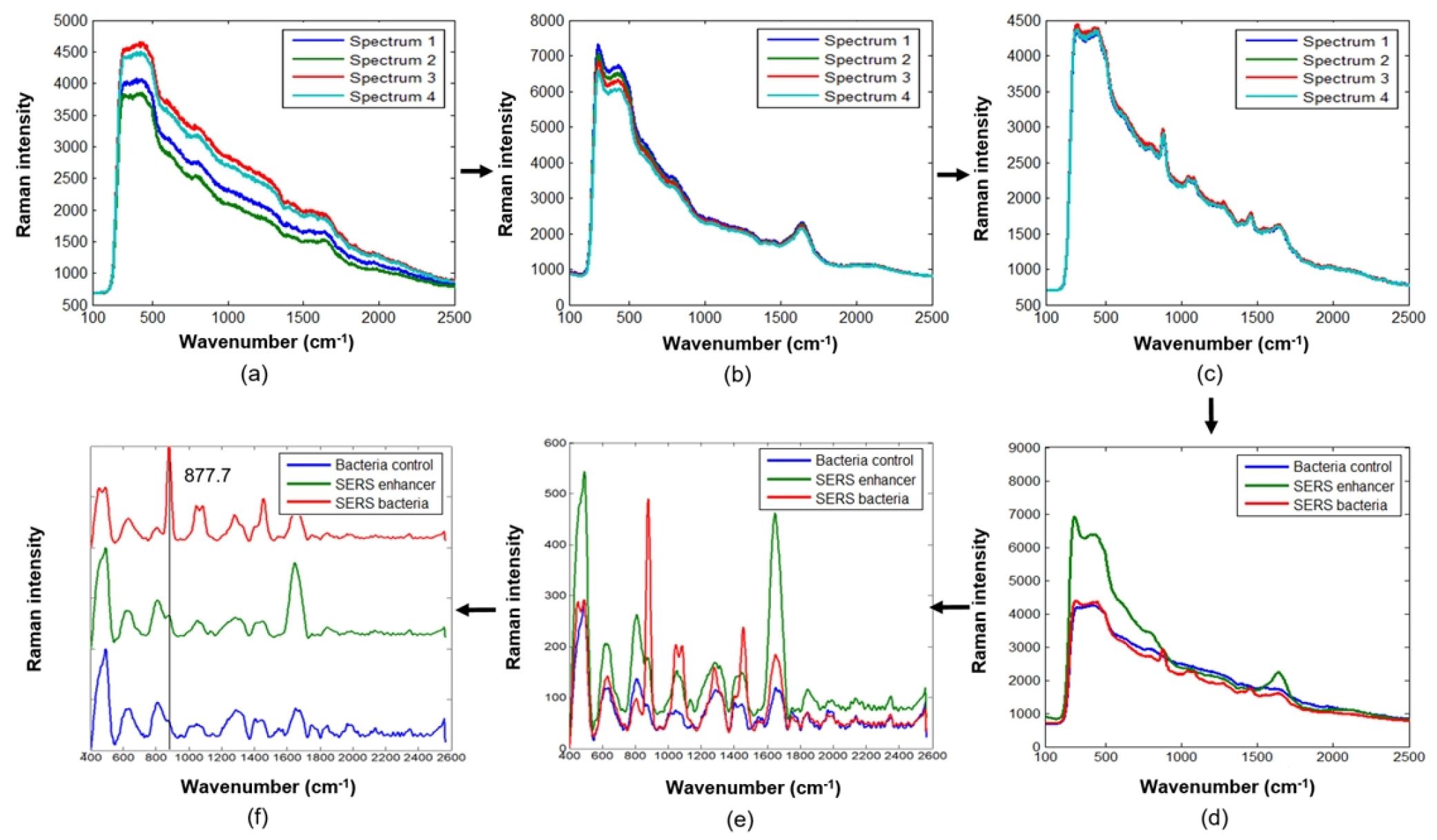 Evaluation of nanoparticles to detect Bacillus cereus and Bacillus thuringiensis 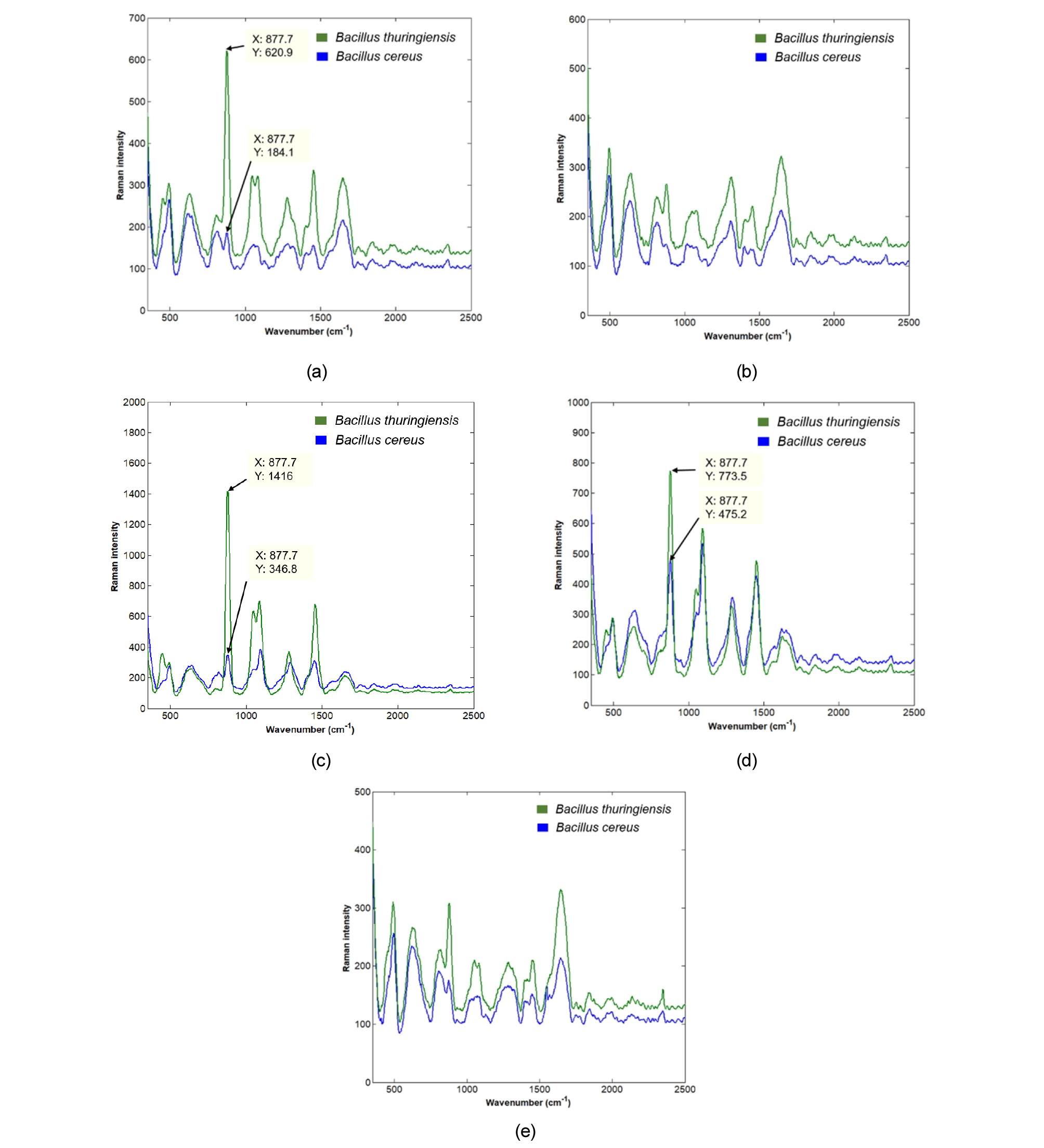 Subsequently, significant differences in Raman intensities between Bc and Bt were observed at 877.7 cm-1 when using nanoparticles A, C, and D. To confirm the reproducibility and significance of the SERS spectra of Bc and Bt, the nanoparticles A, C, and D were selected and analyzed. The results are presented in Table 1 for % RSD and t-test analysis.

Table 1. Comparison of reproducibility and significance of Raman intensities between Bacillus cereus (Bc) and Bacillus thuringiensis (Bt)

a) Statistically significant at the p-value of 0.05.

The % RSD of Bc and Bt are in the range of 4.84–7.43 and 1.77–5.75, respectively. The t-test for Bc and Bt is significant at the p-value of 0.05. For all three nanoparticles, Bt has greater Raman intensity than Bc. The gold nanoparticle stabilized in citrate buffer (nanoparticle A) has the lowest standard deviation for Bc and Bt, and exhibits high reproducibility. The gold nanoparticle stabilized in ethanol (nanoparticle D) shows a higher reproducibility than gold nanoparticle stabilized in ethanol (nanoparticle C) based on % RSD. The SERS spectra of Bc and Bt are very similar to those reported in previous studies (Kalasinsky et al., 2007); despite the different Raman shifts, the spectral profiles of Bc and Bt show similar SERS peak intensity differences in both current and previous studies, with the SERS signal of Bt showing a higher intensity than the Bc signal. It is assumed that Bt has parasporal protein crystals that affect the Raman signal. The SERS peak indicates interaction between the nanoparticle and the bacteria cell envelope that includes the cytoplasmic membrane and cell wall. The 877.7 cm-1 band is not reported to be associated with a specific component of the cell wall. These results can be further confirmed using application to produce such as leafy vegetables for the detection of Bacillus species. Further research may include the evaluation of substrates and SERS tags to improve the SERS signal.

Raman spectroscopy is a prospective alternative for the rapid detection of bacteria using SERS technology. In this study, the SERS effects of five types of nanoparticles were evaluated through the preparation of bacteria and nanoparticles, method development, and SERS measurements. This study evaluates commercially available nanoparticles for the demonstration of a simple and easy-to-use SERS method to detect Bacillus. The Raman intensities resulting from different nanoparticles vary. B. cereus and B. thuringiensis show subtle differences in the Raman intensities at 877.7 cm-1 when using three different gold nanoparticles. These results indicate that the bacteria cell wall interacts with nanoparticles and that combining bacteria with suitable nanoparticles will improve SERS signals, depending on the specific characteristics of each nanoparticle. We expect the results of this study to lay foundation for further research on practical SERS methods to detect bacteria, and furthermore, to differentiate species in the future, such as for pre-screening tools in fresh produce.

The authors have no conflicting financial or other interests.

Go to ContentsGo to Main NevigationGo to Footer